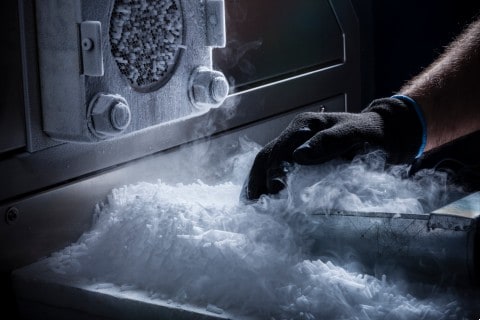 It seems silly that you can follow all of the current guidelines and regulations yet still be denied entry, however, it’s right there, stated behind a bold red caution triangle with an exclamation point on the dry ice page on the TSA website. If you follow the rules, it isn’t likely, but it is possible.

Can You Take Dry Ice on a Plane?

While the TSA and FAA allow you to fly with dry ice in your checked and carry on luggage, each airline may deviate a little for their own rules. For example:

Alaskan airlines pretty much follow TSA’s regulations on dry ice but they only allow it on certain routes.

American Airlines, Hawaiian, and Frontier do not state any further restrictions for dry ice in both carry on bags and checked luggage.

Delta and Allegiant allow it but prefer that you use ice packs to fly with frozen food instead.

United Airlines allows it but will charge you for it as explained below.

Jetblue allows it but in addition to marking the cooler with “Dry Ice” on the outside, you also have to state the item that you’re keeping cool.

So, can you fly with dry ice in a cooler given that it turns into gas and dissipates steadily? Yes, you can and it’s the only way you can fly with dry ice, but there are regulations you have to follow as explained below.

Spirit Airlines allows it but it requires a limited liability release. 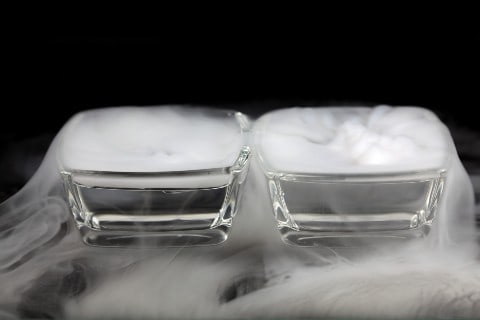 So, how much dry ice can you take on a plane? According to FAA regulations, you are limited to a maximum of 5.5 lbs of dry ice if you’re going to take it onto an airplane. For the metric system aficionados out there, that comes to 2.5 kg. That’s not a bunch of dry ice, believe it or not, and how you carry it on is regulated as well.

CO² is heavier than air, so it fills enclosed spaces from the bottom up. As CO² concentration increases above 1%, humans will begin to suffer fatigue. The higher it goes, the higher the risk of asphyxiation.

Second, it’s an explosive hazard if it is not properly ventilated. Keeping the total allowable amount of dry ice set at 5.5 lbs ensures that if the ventilation were to somehow fail, the resulting explosion from expanding CO² gas would be minor.

With either the first or second reason, it’s easy to see why the FAA would prefer to regulate dry ice amounts on all plane flights within and without the continental United States.

How Long Will Dry Ice Last in a Cooler?

It depends on how much dry ice you pack into your cooler. Even in a freezer, where the temperature comes nowhere near the -109°F necessary to maintain dry ice in its solid-state, you will lose roughly five to ten pounds over a 24 hour period.

Seeing as the dry ice will rapidly cool down the interior of your cooler, you can expect it to convert to gas and completely dissipate at a rate of about 0.4lbs per hour. In other words, 24 hours for 10lbs and then it will dissipate into the air, becoming food for the local plant life if you’re on earth.

How Much Dry Ice Do I Need for a Cooler?

Of course, the overall longevity you get from the dry ice depends on other factors as well. For instance, if you decide you’re going to do a crawfish boil and pack 50+lbs of crawfish, it’s going to sublimate faster. If you’re packing some hotdogs and a 12-pack, not so much.

Note that the FAA also lets you combine dry ice with regular or gel ice packs in case 5.5 lbs isn’t enough to keep your food in a frozen state throughout the journey. Just make sure that if it’s in carry on luggage, any liquid or gel doesn’t exceed 3.4 ozs per container and that’s in a completely solid state when you pass through security.

Do Airlines Charge for Dry Ice?

So far we know of only one airline that charges you to take dry ice with you on the plane – United Airlines. You will be charged $150 or $200, depending on the route you fly. All other airlines let you pack dry ice for free as long as you follow their specific rules regarding packing it.

How to Pack Dry Ice for Air Travel 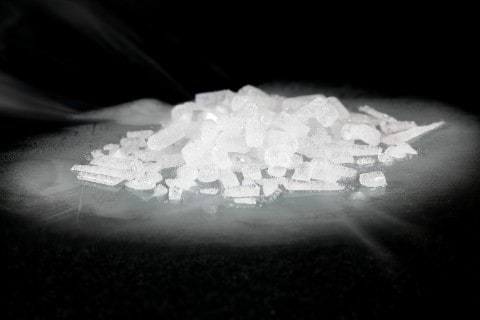 While packing dry ice isn’t the same as packing fruit for a flight, how you pack dry ice for air travel is largely irrelevant, so long as you take care of a few things.

The FAA doesn’t go into specifics concerning packaging materials, however, that doesn’t mean that you will get away with sealing it and claiming that it’s ventilated at the security check. TSA will ensure that the packaging material is ventilated, so don’t give them a reason to turn the package down. Most airlines also specify that you have to use an appropriate cooler and that styrofoam ones aren’t allowed.

You can also expect the package to be weighed. If you leave the house with 5.5lbs of dry ice over your medicine, expect it to weigh less by the time you go through a TSA checkpoint, as some of it will sublimate.

There are several advantages to dry ice, especially when compared to regular ice.

Since dry ice is so much colder than regular ice, it will do a much better job of keeping your frozen items frozen, especially when you don’t want them to thaw out. Since it sublimates back into CO² gas, you don’t have to worry about excess water or soaking the other items that you want to stay dry.

Unless you’re transporting medicine, dry ice may not be the best method to keep your things cool, especially if it’s just a camping trip and not a plane flight.

Of course, you’re not going to be faced with most of the negatives if you are using dry ice in a cooler on a flight, especially if you are transporting medicine. Just keep in mind the FAA regulations, the fact that you will still need to go through TSA, and checking with your airline ahead of time.